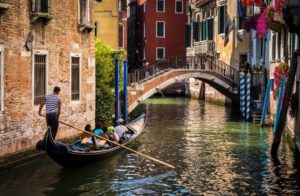 It is one of the most important destinations in the whole wide international tourist circuit because it is a unique, marvellous city that no one should miss.
Venice was erected on 117 small islands, connected by countless bridges and passages and it is comparable to an enormous traffic island. Two hours’ walk are required to move to St. Mark (San Marco) Square from the railroad station, unless you lose your way: nevertheless this is a “risk” to be run.
Walking and strolling, you will discover the celebrated lagoon attractions (such as St. Mark’s Basilica to the Churches of Santa Maria della Salute, San Giorgio Maggiore and Redentore; the Palace of the Doges – the Rulers of the Republic of Venice up to 1797 – to the Canal Grande), as well as less crowded but equally charming corners. On that subject, a trip to the old jewish Ghetto quarter is absolutely due. [More Informations] 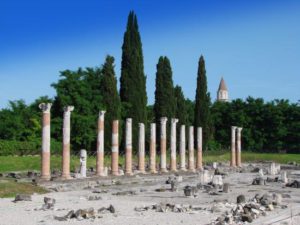 It is one of the most important cities of the Roman Empire. Aquileia was founded in the year 181 B.C. and became an outstanding trading port besides an important center of radiation of the Christianity. This ancient roman metropolis was certified as historical and archaeological heritage of mankind by UNESCO and several evidences of its splendour can be admired still today.
Moreover, you can visit the fluvial port, the market, the holy street, the theatre, the forum, the aristocratic mansions and furthermore the National Archaeological Museum. In the patriarchal Basilica is located one of the most large and ancient mosaics of the West World, finely decorated with marine scenes, while the Palaeochristian Museum keeps a most interesting inheritance of frescos, mosaics and reliefs.[More Informations] 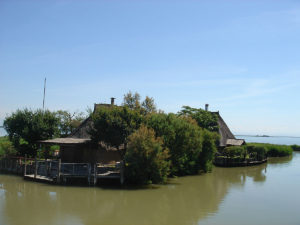 Marano is an ancient stronghold on the so-called Marano lagoon recalling its past status of bulwark – ruled by the Serenissima Republic of Venice since 1534 – in the land of Friuli. It still keeps an unbroken atmosphere of an old fisherman town, with the ancient buildings facing the seaport and the fish-market. The 15th century patriarchal tower still stands in the central square showing the heraldic bearings of the Venetian Governors, whose loggia and palace are not so far away.
Marano still today is a lively fishing center and it is widely renowned for its typical inns, where you can relish a genuine strictly fish-based cooking with perfumed white Friuli wines matching such delicious dishes of fish. Furthermore, in the lagoon of Marano one of the most interesting wildlife park for the avifauna – as far as the region and the whole north-east Italy is concerned – is located. [More Informations] 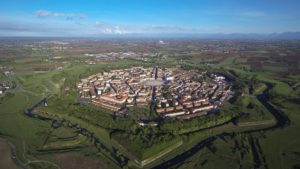 Palmanova is a nine-point star-shaped fortress erected at the end of the 16th century by the Venetians to face the dreadful Turkish invasions and to check the hegemonic designs of the Austro-Hungarian empire. It is an inexpugnable stronghold, whose perfection lies in its perfect architectural symmetry and war efficiency. The project arose from an idea conceived by Giulio Savorgnan, a captain and military engineer of the Republic of Venice.
The city wall perimeter is a 18-side polygon divided into nine ramparts. Bonaparte furtherly increased the fortifications and renamed the city Palma la Nuova (Palma the New). Three gates, probably designed by Vincenzo Scamozzi, give access to the city: Aquileia gate (formerly Marittima gate), Udine gate and Cividale gate.
A main step to gain a good knowledge of the history of the city is a visit to the Civico Museo Storico (Civic Historical Museum) where documents about the history of the fortress and a collection of weapons (16th to 20th century) are shown. Another outstanding museum is the Historic Military Museum where documents, relics, collections of weapons and a complete general wiew on the garrisons on duty in Palmanova are exposed.
An undoubtedly interesting visit of the venetian and french fortifications can take place crossing ramparts, loggias, exit ramps, ravelins, underground communication trenches, gates and old barracks. Then, the palaces of the Governor-General (now City Hall) , the Arms Governor, the Pawnshop, the Cathedral Church an the loggias stand in the hexagonal central square, formerly named Piazza d’Armi (Drill-ground). [More Informations] 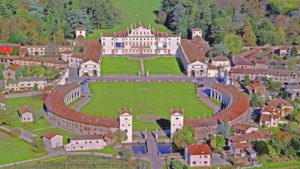 Lodovico Manin was the last Doge of the Venetian Republic and his family came from the land of Friuli. In this land the Manin family erected this immense villa facing a large hemicycle-shaped square surrounded by a long colonnade. After the fall of the Venetian Republic, the villa worked as Bonaparte’s headquarters and in this residence the Treaty of Campoformido was prepared to make over the possession of the venetian territories to the Austrian empire.
Today, the villa is employed as a seat of cultural exhibitions, while the boundless park at the back is open to the public.
You can easily reach the villa from Codroipo, thanks to the cycle-track leading to Passariano. The approach from south is nevertheless more spectacular: the villa appears from a distance in the middle of the cornfields, headed by the two towers marking the entrance of the hemicycle square. [More Informations] 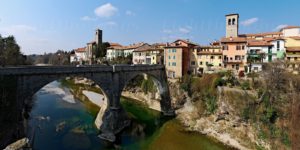 In the district of Udine, Cividale del Friuli lies upon the gentle hills covered with vineyards and called “Colli Orientali del Friuli” (Eastern Hills of Friuli), a celebrated area where wine denomination is strictly controlled to preserve origin and quality of the products. These areas are called D.O.C. and reach the big number of eight in the territory of Friuli Venezia Giulia!
Cividale was born as a roman city (its former name Forum Julii became later the name of the whole region : Friuli) and acquired a relevant importance in the year 568 becoming the seat of the first Longobard Dukedom in Italy besides being the main center of the region. Later on, Cividale was under the Frankish rule (even Charles the Great was here), the Patriarchs of Aquileia, the Venetians, the Hapsburg stock. A visit to the impressive Cathedral Church cannot be missed as well as to the Christian and Archaeological Museums with a final look to the small Longobard temple which is reputed to be a real tiny jewel.
Finally, we suggest you a nice walk on the imposing Ponte del Diavolo (Devil’s Bridge) which goes as the town’s symbol. [More Informations] 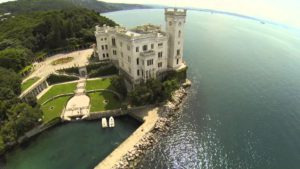 The Castle of Miramare and its park were erected on the karst rocky headland of Grignano, close to Triest, according to the will of Ferdinand Maximilian of Hapsburg (1832-1867), the younger brother of the austrian emperor Francis Joseph.
The estate was designed in 1856 by Carl Junker and the outer construction was completed in 1860. Furnishings and inner decorations, by Franz and Julius Hofman, were completed after Maximilian’s departure to Mexico in 1864. After being appointed emperor of Mexico, Maximilian was shot at Queretaro in 1867.
The Castle is one among the fewest examples of a satisfactorily preserved aristocratic residence free from shocking changes or remakes while it exercises an unbroken charm, through the furnishings and the decorations in eclectic style, of living in the middle of the nineteenth century in a place where mediterranean suggestion is melting with the atmosphere of tipically northern shapes. [More Informations] 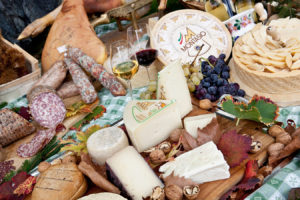 Friuli offers you a lot of tours that will lead you to discover charming art treasures, historical ruins, exquisite wines, gastronomical specialties, wildlife parks.We can give you the cue to spend a real special day during your holidays or to make some interesting off-season discoveries …perhaps tasting some savoury slices of raw ham from San Daniele del Friuli on the spot!  Or sipping one of the regal wines of the Collio, enjoying it directly at the producer’s home, as well as it is recommended to taste what is widely known as the tipical product of the region i.e. the latteria cheese. If you are busy in getting the ancient taste of the Gubana cake within the valleys of the Natisone river at Vogrig’s home.